The Church of St. Rocco

The Church of St. Rocco was located outside the medieval walls of Guarene. The gateway to the village, called Porta Nova or San Rocco, sopened right in front of the current church.

The history of the church of St. Rocco is linked to the cult of St. Rocco, a Saint whom the local communities were particularly devoted to, and who was invoked for protection especially in times of pestilence.
Following the terrible epidemic of 1631 that halved the population, the inhabitants of Guarene decided to erect a church named after the Saint as an ex voto to survive the calamity, in the same place where there was a small votive shrine dedicated to St. Rocco. The works were carried out by the masters of Lugano, skilled carpenters, very sought-after at the time. 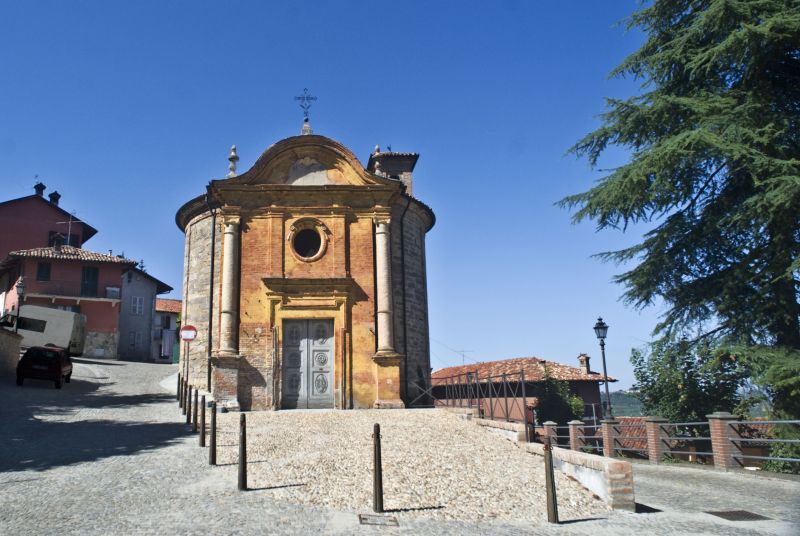 The building was completed within a few years, at least as far as the external structure is concerned, so that the inhabitants gathered inside it for the community council. The church, however, had a short life: once the internal decorations were also completed, in the mid-eighteenth century it already showed signs of advanced deterioration, due to the improper use made over the years, especially by military troops who occasionally stopped in the town.

At the beginning of the 19th century, the building was demolished and rebuilt in its current form: an exposed brick façade with typical baroque lines was inserted into a circular body characterized by a mixed stone and brick wall texture.
Currently, the church is used during the patron Saint’s day, August 16th. This festivity was and is characterized by a procession and the blessing of the cattle, of which the Saint is the protector, and by the distribution of the “bread of charity”, or “caritone”.