The Church of St. Peter and Bartholomew

Initially, this church was dedicated only to St. Bartholomew, because, at the intersection of St. Anthony, just outside the walls of the village, there was another church dedicated to St. Peter, which served as a parish church.
Due to a severe deterioration, the Church of St. Peter was abandoned and, from the second half of the 16th century, the parochial functions were transferred to the Church of St. Bartholomew which was then named also after St. Peter.
Originally the church had a rectangular plan, divided into three naves; it also had a square-shaped choir from which both the bell tower and the sacristy could be accessed.

The square of the church, sometimes used as a cemetery, was bordered by a wall and it had two access doors, one located on the main street, and another placed on the street that runs along the building, where an overhead covered passage connected the church with the premises owned by the Congregation of Charity, in correspondence with what today is the embankment of the Castle. 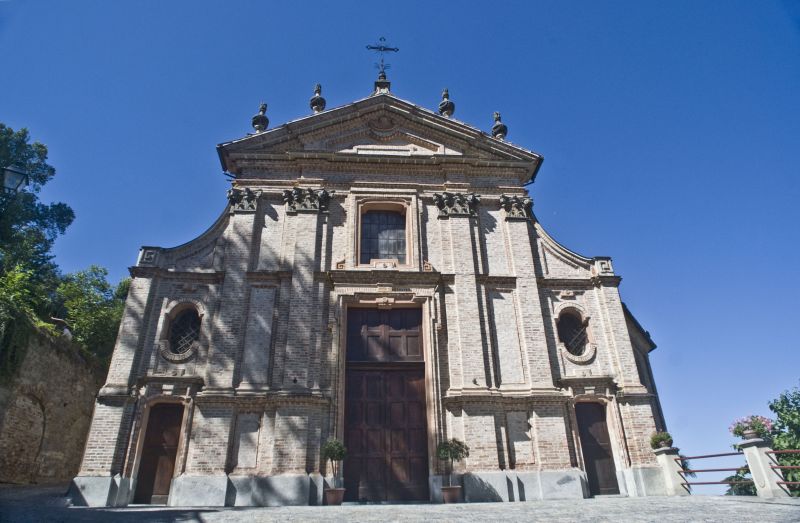 The high degree of deterioration of the structure and the need to increase its capacity led to the decision to demolish the building and rebuild it. The project was entrusted by Count Traiano Roero to engineer Filippo Castelli from San Damiano, in 1781. Financial problems led to downsizing the first project by Castelli and to embark a project based on the renovation of the existing building, with the retraction of the choir and the sacristy.
In 1825, Archpriest Romero built a small additional aisle towards the valley on the extension of the sacristy, supported by columns and arches that still form the small cloister that leads the canonical house, which is located on the road to the left of the church.

Valuable canvases and ancient altarpieces adorn the walls of the church, the presbytery, and the sacristy.
In the presbytery, particularly noteworthy are a “Deposition” by Gaudenzio Ferrari and, in the sacristy, a painting by Guglielmo Caccia, also known as “Moncalvo”. The painting depicts St. Rocco and St. Sebastian at the foot of the Holy Virgin surrounded by two little cherubs, and dates back to 1585.

At the beginning of the 20th century, perhaps the painters took inspiration from people who actually lived in Guarene to represent some characters painted on the vaults, giving a permanent testimony to the life of some people in the community.
The parish church was connected to the castle gardens by a covered passage that crosses the street and divides the church from the wall that contains the embankment of the castle gardens. This passage, called
“voltone”, allowed the Counts and their guests to access the private gallery located in the church.