The Church of St. Michael

The Church of St. Michael is located in one of the main intersections of the historic core of Guarene. In the past, the main square of the village was located in this area. In place of the current church there was a civilian building housing the Confraternity of St. Michael, while the church was further downstream, semi recessed in the slope of the hill, with the façade facing the valley and the entrance door at the arch crossing the road. Opposite the Confraternity building was the Community House, with the seat of the court.

The square was very large, because there were no buildings up to the city walls. Over the centuries, with the construction of new houses and the displacement and expansion of the church, the area ended up looking like is does today.

The Church of St. Michael is the oldest religious building of the city, mentioned in documents since 1379; ii is also the place where the contract of sale of Guarene to the Roero family was signed.
The church has always been the object of partial remakes, additions, renovations and interventions, without ever being completely demolished and rebuilt. To adapt the building to its new function, the lateral chapels, the sacristy, and the presbytery were added later.

The current facade is the result of a restoration that took place in 1868, characterized by the positioning of the two statues of St. Anthony Abate on the left, and St. Vincent Ferrer on the right, both naming an altar inside. The third altar, in addition to the major altar, is named after the Guardian Angel. The bell tower was built in 1890 by the Guarenese Antonio Isnardi.
The church is today deconsecrated; currently it is not used, but projects are being drafted to reopen it to the public for various cultural activities. 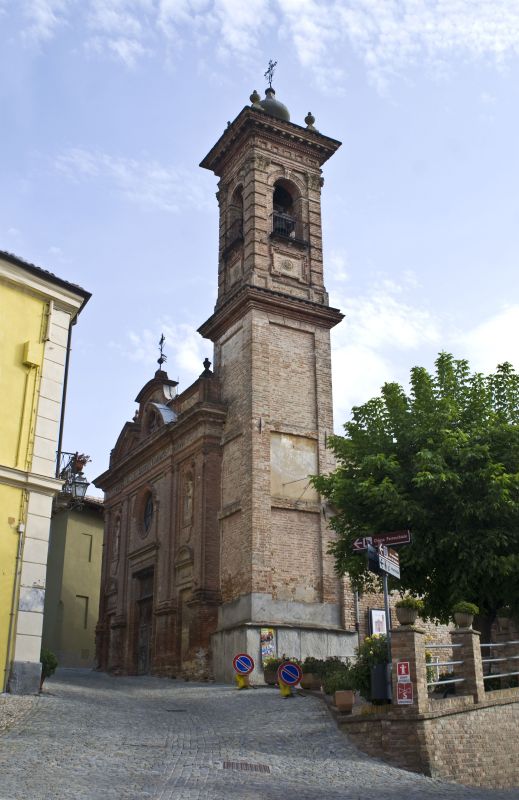