The Castle is the symbol of the City of Guarene; this imposing building also makes Guarene recognizable from many parts of the surrounding territory, due to its position on the top of the hill, well-protected by a high embankment.
The castle has been on the hill of Guarene for a very long time. Originally, it was a building with the function, of protecting and controlling the territory. Over the centuries, and due to geo-political changes, the Castle has lost its strategic function and has become a stately home.
In addition to the decision of the Roero family to transform it into their residence after abandoning the Castle of Vezza, the change was due to the initiative of Count Carlo Giacinto Roero, who was interested in its architecture. The Count was a friend of the great architect of the Savoy court Filippo Juvarra, so much so that for a long time it was thought that the project of the Castle was the work of Juvarra himself, instead of Count Roero. 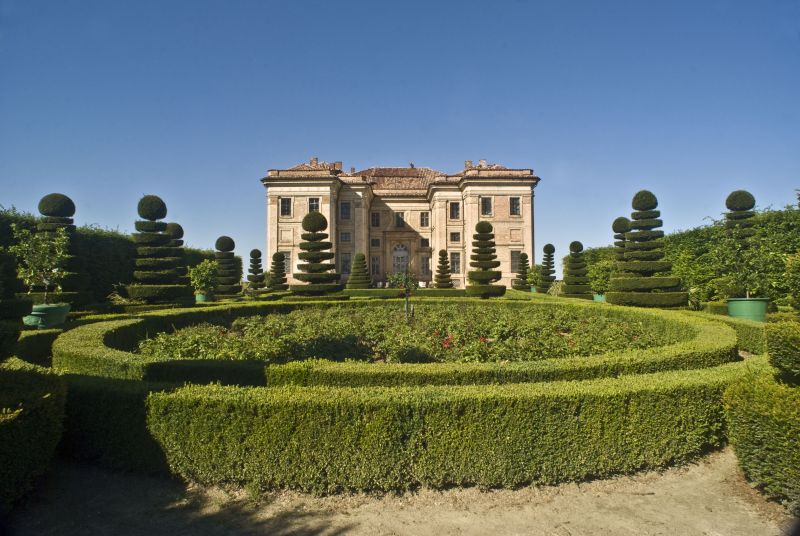 The works began in 1726, with the almost complete demolition of the old building and the construction of the new one. The Castle was completed around 1775, both as regards the structural parts and the decorative apparatus, entrusted to important artists of the time. As early as 1737, the construction of the Italian Garden, began located on two levels south of the castle, entrusted to the gardener of the Castle of Govone. The Roero family was extinct in 1899 with Count Alessandro and the castle was inherited by the Counts Provana of Collegno. In 2011, it was sold to its new owners and, currently, in addition to the museum, it hosts a luxury hotel and a restaurant.

Built in exposed brick, the Castle has a structure enlivened by front and back parts, with decorative architectural elements that harmonize its shape.
The main façade is crowned by a false third floor, which further slims its profile.
The Castle is C-shaped, with a straight main façade and a small courtyard facing the gardens.
On the sides, the structure is flanked by two balconies connecting the main floor with the upper garden, from which the surrounding landscape can be viewed. Below these balconies, two long vaulted galleries used as a warehouse represent the service areas, useful for the management of the gardens.
Located on two levels, the gardens are characterized by hedges of various shapes, ancient trees, citrus plants, and flowerbeds with different types of flowers. On the opposite side of the entrance gate to the Castle is a chapel dedicated to St. Theresa, built according to a project by architect Filippo Castelli from San Damiano, who had taken over the construction of the castle after the death of Count Carlo Giacinto in 1749.

« The Service Buildings of the Castle The Church of St. Peter and Bartholomew »