On the road to Alba is a small village called Castelrotto and this is the exact spot where Oriolo was born in ancient times.
As cited in the Registrum Comunis Albae, it is where a fortified camp was established in the 9th century, the Castrum Auriolo, which was almost certainly owned by the Aurelia family during the Roman era.

The lord was the Marquis of Monforte whom, in 1157, donated his properties and its inhabitants to the Count of Loreto to re-acquire them as a fief. In 1193 he appeared as Count Oriolo Guglielmo Ferracane: on 12 July 1456, on the brink of death, Oggero di Oriolo divided his property between his two sons Jacob and Anthony; and thus began the decline of the Oriolo fief.

In 1557 the castle was destroyed. A single tower that remained, which belonged to Portinari family of Alba, was destroyed in 1800. Castrum Ruptum was one of the seven Camparie that the city of Alba was divided into. The small church in the village, now privately owned, was built in 1726 in baroque style on the ancient ruins of the chapel dedicated to Our Lady of the Assumption.

With Napoleon’s invasion of Italy and the laws against monasteries, this Abbey also ceased to exist. The last Abbess was Mother Mary Galliano who died in 1846, and whose remains are in the Castelrotto Parish. Due to population growth, in 1778, a new church was built in the baroque style and consecrated by the Bishop of Alba Nicola, and a Parish church was subsequently erected in 1949. 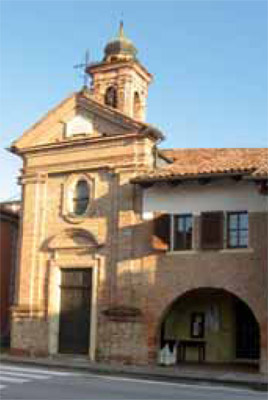